The parts of this nervous system are the cerebrum, cerebellum, spinal cord and spinal cord.

The central nervous system (CNS) is the part of the nervous system that coordinates the activities of all body parts of bilaterian animals—that is, all multicellular animals except radially symmetrical sponges and animals such as jellyfish.

Together with the peripheral nervous system it has a fundamental role in behavioral control. The CNS is contained within the dorsal cavity, with the brain in the cranial cavity and the spine in the spinal cavity. The human brain consists of 3 parts, namely the forebrain, midbrain, and hindbrain. Here’s the explanation:

Cerebrum is part of the nervous system that contains cerebrospinal fluid around it which is useful for feeding the brain and can protect it from shock. In the cerebrum there are also many blood vessels that can be useful for supplying oxygen.

Serebum is able to formulate all complex activities, such as when you are studying, playing or thinking. When reading a topic or study material, for example, the cerebrum determines what information is important and must be remembered.

The right hemisphere has the ability to solve visual problems, while the left hemisphere works more rationally and analytically. This section functions as a center for coordinating movements between muscles that occur consciously, balanced and in body position. In other words, the cerebellum is the balance center of the body.

In this part of the hindbrain there is also a pons varoli or varol bridge. Pons varoli is responsible for connecting or delivering impulses back and forth from the right and left hemispheres of the brain. 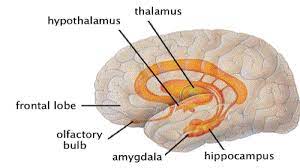 The midbrain, commonly called the mesencephalon, is positioned parallel to and closer to the eyes and ears. Because the two sense organs are closer, the task of the mesencephalon is related to our hearing and vision.

The mesencephalon is able to translate sound information from both ears, even though the center of vision in the brain is the cerebrum, but this mesencephalon also has a role in eye reflexes.

For example, when there is disturbing dust or there is a blinding light, it is this mesencephalon that you unconsciously work to close your eyes. This section functions as a reflex center, because in the spinal cord there are sensory, motor and connecting nerves. The function of these nerves is to conduct impulses from the brain.

This section functions to regulate body temperature, control vomiting and regulate several reflex movements such as coughing, sneezing and blinking and besides that this brain part also functions as the respiratory center.

Well, that’s a discussion of the Central Nervous System along with its structure, function and description. Hope it is useful!