A complete explanation of what sensory and motor neuron cells are, starting from their understanding, function, structure, types, parts, pictures, and anatomy. 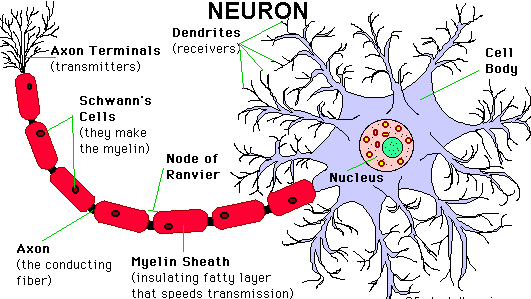 What are neurons? Neurons are cells that include the main working unit in the human nervous system. Neuron cells are also called as nerve cells. The function of neurons is to deliver “stimulating” impulses originating from the ‘sensory’ receptors to the brain and vice versa. In addition, these cells are also responsible for reflex movements.

These cells will form a nervous system in humans. You need to know that nerve cells are not the same as cells in general. This is because there are neurites that make the nerves look like they have a tail. These cells also have parts that you can generally find in animal cells and other parts.

The next information you should also know is about the types of neurons. Based on their function, neurons are divided into three types, namely sensory neurons, motor neurons, and also intermediate neurons or connector cells.

Motor neurons are a type of cell that plays a role in transmitting impulses originating from central nervous cells to muscle or glandular cells. Then the body will respond to these stimuli by moving or can produce a secretory product. Normally, motor neuron cells have short dendrites and long axons.

The third type of nerve cell is called a connector or intermediate nerve cell. These nerve cells are useful for connecting sensory nerve cells with motor nerve cells or relating to other nerve cells in the central nervous system. The axos, nerve fibers, and dendrites in these cells combine in a single sheath to form nerves. Meanwhile, the cell bodies will gather in a place which then forms a nerve ganglion. Neuron cells have several parts. There are at least 9 neuron cell part that you should know. We will explain the parts of neurons below:

In the cytoplasm there are Nissi grains which play an important role in protein synthesis. These Nissi grains contain RNA so that they are able to carry out their duties. But keep in mind that the cell body is only found in central nervous cells, namely the brain and spinal cord as well as the ganglion (a collection of nerves outside the central nervous system).

The axon is a long-shaped nerve cell fiber which is actually an extension of the cytoplasm of the cell body. If you pay attention, neurites are almost the same as dendrites, but there is only one neurite and they are longer in size. In addition, neurites also have a larger shape compared to dendrites.

Inside the axon, you will find fine threads. These fine threads are known as neurofibrils. What is the role of the axon? Axons are responsible for transmitting impulses from the cell body to effectors such as muscles and glands.

Although axons are only a few micrometers in diameter, they can be 1 to 2 meters long. The axon functions to transmit impulses from the nerve cell body to other nerve cells.

See also  ELEMENTS OF SCIENTIFIC RESEARCH THAT MUST BE UNDERSTOOD

The function of the Schwann cell is to speed up the passage of impulses. In addition, these cells also help in providing food that is beneficial to neurites and helps in neurite regeneration.

Oligodendrocytes are supporting cells that play a role in providing insulation for nerve cells that form the myelin sheath around the axon. The function of oligodendrocytes is to form the same myelin sheath in the central nervous system and act as a supporter. This supporting cell has several longitudinal projections in it and each of these extensions wraps around a piece of the axon between neurons to form a myelinated segment.

The structure of the next neuron is called a synapse. Synapses are gaps that are the meeting point between one neuron and another. Each synapse will provide a connection between neurons so that there will be an exchange of information between the neurons. The information will be exchanged in the form of chemicals called neurotransmitters.

At the end of the neutite in each cell there is a pocket. This sac is known as the axon bulb. This pocket will later produce the neurotransmitters we mentioned earlier.

Thus the information we can provide about nerve cells which includes the meaning, function, structure, and types. Hope it is useful.